Just before the NRA Meetings this year, we announced that we’d be releasing our take on the bipod and deliver it with three different mounting options. Our goal with this product was to deliver the design, strength, and feature set that can’t be found in a product at this price point. It’s sleek, stays out of your way when you don’t need it, and deploys quickly and reliably when you do. There has been relentless customer demand, and we’re happy to say that the time has come for us to release the Magpul® Bipod with M-LOK, Picatinny and A.R.M.S.® 17S Style mounting options. 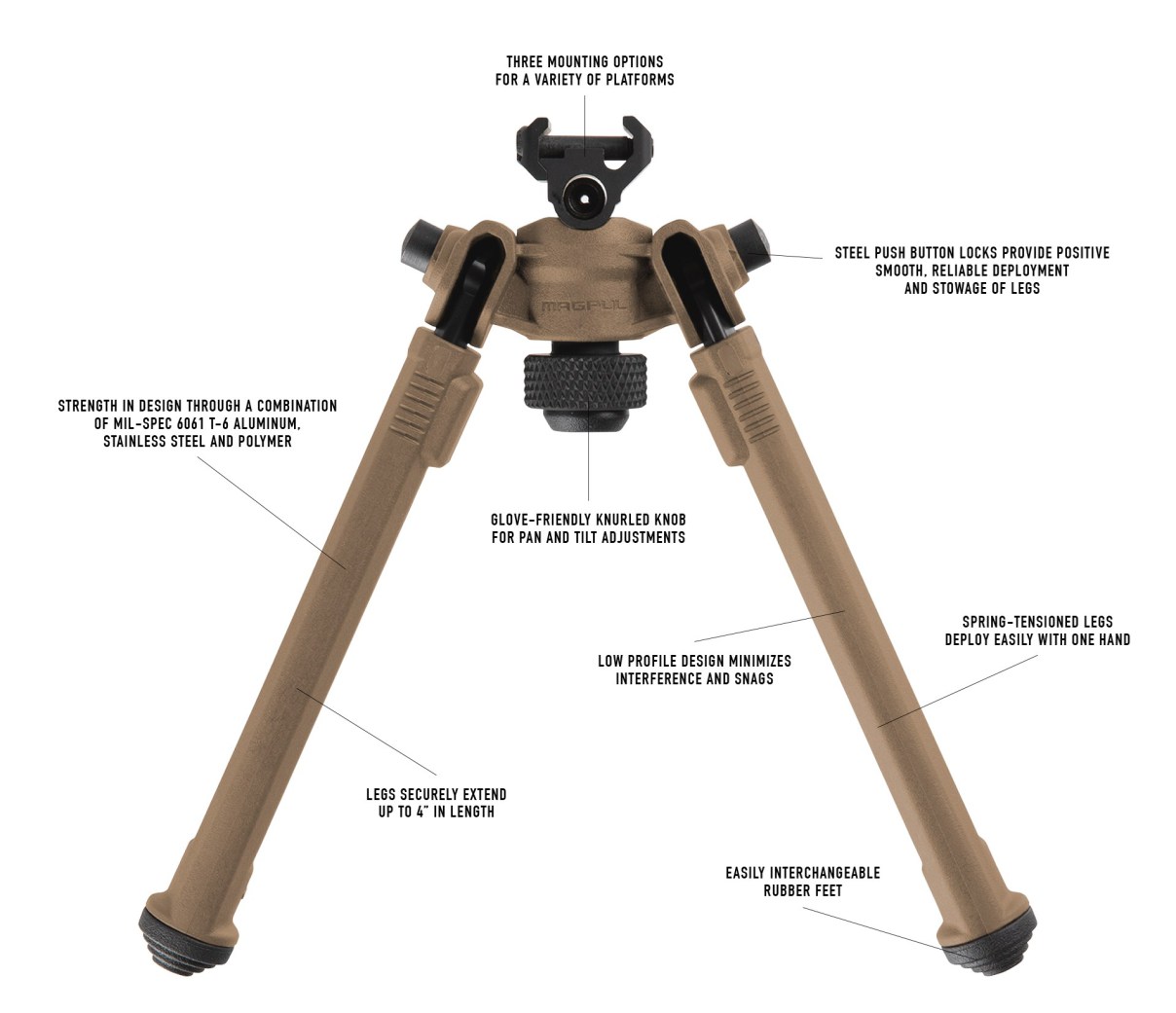 The Magpul Bipod is exceptionally strong and built to perform under punishing field conditions.  Like all Magpul products, the Bipod is constructed of rugged, high-strength materials and designed to last a lifetime. In the shooting position, it is easily loaded with stabilizing forward tension without fear of failure or warping. Mil-spec hard anodized 6061 T-6 aluminum, stainless steel internals, and injection-molded reinforced polymer ensure years of dependable performance and reliability, all while shaving weight. At just over 11 oz., the Magpul Bipod is lighter than many pricier bipods currently on the market.

Innovative, Adjustable, & Easy to Use
Deploying and adjusting the Magpul Bipod is quick and easy. Spring-tensioned legs stow neatly forward and snap down and lock into place with one hand. Leg extensions slide and lock securely with the push of a button on any of the seven half-inch spaced locking detents. The legs extend a full four inches, from 6.3” to 10.3”. An industry-exclusive 50° of total tilt and 40° of total pan are controlled by a glove-friendly knurled tool-less bipod locking knob located between the extended legs, allowing easy adjustment between shots. Additionally, the Magpul Bipod has the exclusive ability to lock pan at 0° while maintaining full tilt functionality.

Smooth & Unobtrusive
From the drawing board, the Magpul Bipod was designed to be barely noticed until needed. Folded, the streamlined housing and legs fit neatly under the barrel and are just under 2.3” deep and 3.3” wide. In addition, anodized surfaces and tight, precision tolerances mitigate squeaks and rattles.

Functional Feet
The Magpul Bipod has many features that are also useful even when it is in the stowed position. A soft rubber bipod locking knob cap is attached to the locking knob gives users a steady, non-marring forward rest while the bipod is folded. Additionally, its staggered soft rubber feet hold fast on a variety of shooting surfaces and are easily removed with a roll pin punch. Should users choose to change feet, the Magpul Bipod’s legs accept most Atlas pattern bipod replaceable feet.

The Magpul Bipod is available in BLK or FDE colors.