The History of Eugene Stoner and the M16

The History of Eugene Stoner and the M16

Eugene Morrison Stoner, the American firearms designer who, while tinkering at night in his garage, developed the original version of America’s classic rifle the M-16.  He later died at his home at age 74 in Palm City, Florida from cancer. While he had no formal engineering education, Mr. Stoner was widely regarded as one of the world’s foremost designers of and experts on small arms. His M-16 has been standard issue for the United States armed forces since 1963, and he designed a wide range of weapons of various types of ammunition calibers as well.

In late 1945 Stoner began working in the machine shop for Whittaker, an aircraft equipment company, and ultimately became a Design Engineer.  In 1954 he came to work as chief engineer for ArmaLite, a division of Fairchild Engine & Airplane Corporation. While at ArmaLite, he designed a series of prototype small arms, including the AR-3, AR-9, AR-11, AR-12, none of which saw significant production. Their only real success during this period was the AR-5 survival rifle, which was adopted by the United States Air Force.

In 1955, Stoner completed initial design work on the revolutionary AR-10, a lightweight (7.25 lbs.) select-fire infantry rifle in 7.62×51mm NATO caliber. The AR-10 was submitted for rifle evaluation trials to the US Army’s Aberdeen Proving Ground late in 1956. In comparison with competing rifle designs previously submitted for evaluation, the AR-10 was smaller, easier to fire in automatic, and much lighter. However it arrived very late in the testing cycle, and the army rejected the AR-10 in favor of the more conventional T44, which became the M14. The AR-10’s design was later licensed to the Dutch firm of Artillerie Inrichtingen, who produced the AR-10 until 1960 for sale to various military forces.  At the request of the U.S. military, Stoner’s chief assistant, Robert Fremont along with Jim Sullivan designed the AR-15 from the basic AR-10 model, scaling it down to fire the small-caliber .223 Remington cartridge, slightly enlarged to meet the minimum Army penetration requirements. The AR-15 was later adopted by United States military forces as the M16 rifle.

After ArmaLite sold the rights to the AR-15 to the Colt Firearms Company, Stoner turned his attention to the AR-16 design. This was another advanced 7.62 mm rifle but used a more conventional piston and a number of stamped parts to reduce cost. This weapon saw only prototype development but adaptation to .223 resulted in the somewhat successful and often imitated Armalite AR-18. Stoner left ArmaLite in 1961 to serve as a consultant for Colt. He eventually accepted a position with Cadillac Gage where he designed the Stoner 63 Weapons System. This was a modular weapons system which could be reconfigured to be a standard automatic rifle, a light machine gun, a medium machine gun, or a solenoid-fired fixed machine gun. 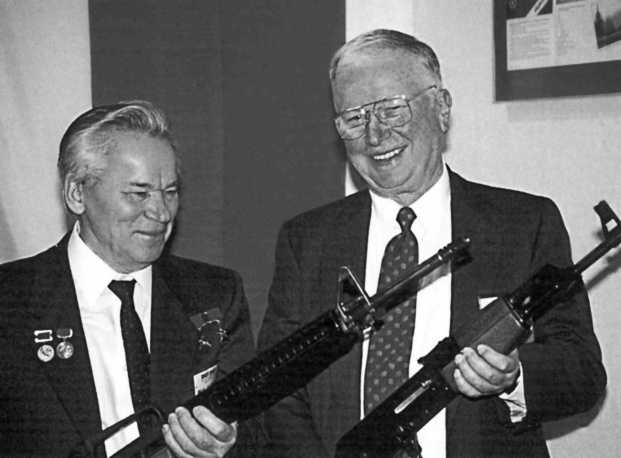 Two Legends in one photo.

His role in the development of the M-16 was similar to that of Mikhail Kalashnikov in designing the Soviet counterpart, the AK-47. The two inventors of the world’s leading small, rapid-fire military weapons, met at conferences, became friends and compared notes. Mr. Stoner said that while the AK-47 was less complicated and tended to break down less often, the M-16 was lighter and fired more accurately. Mr. Kalashnikov said of his initial work on the weapon in 1947, ”When I was lying wounded during the war, I heard the other soldiers complaining about how the German weapons were better than ours,” he said. ”So I was determined to invent something for the ordinary soldier — a weapon that would be simple, tough and better than any other in the world.”

Their life styles were not comparable. Mr. Stoner’s inventions made him a millionaire. He was also a pilot with his own plane. Mr. Kalashnikov, a tiny white-haired man who lived on a state pension in a small apartment east of Moscow. ”Stoner has his own aircraft.” he once said, ”I can’t even afford my own plane ticket.”

Hearing about his work, Army experts sought out Mr. Stoner in the mid-1950’s to help develop automatic rifles using smaller, faster bullets. Later, in the early 1960’s he invented what came to be known as the Stoner 63, an automatic weapon using interchangeable parts that could be converted from a light rifle into a rapid-firing gun to conserve ammunition.

Mr. Stoner is survived by his wife, Barbara Hitt Stoner, whom he married in 1965; his first wife, Jean Stoner Mahony of Newport Beach, Calif., from whom he was divorced in 1962; four children from his first marriage, Patricia Magee of Alpine, Wyo., Susan Kleinpell of Bloomfield Hills, Mich., Deirdre Elmore of Tiburon, Calif., and Michael, of Minneapolis, seven grandchildren and four great-grandchildren. 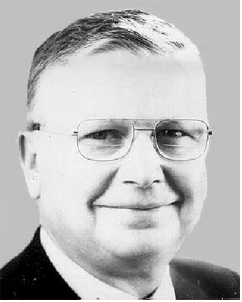