Beretta just announced the 92X Performance! A steel-framed pistol with an oversized, ambidextrous, frame-mounted safety versus the traditional slide safety or decocker on previous 92 pistols. The new gun also features a Brigadier slide and an Extreme-S trigger which reduces reset by 40%. The other upgrades include a match-style takedown lever, a skeletonized hammer and a more pronounced beavertail backstrap.

Pricing has not been made available yet at this time.

The 92X Performance was created to satisfy two requirements: Speed and accuracy. Beretta’s new competition pistol is uncompromising and aims for top performance, offering the world of competitive dynamic shooting one of the most reliable and world-renowned locking systems, together with a steel frame, a heavier Brigadier slide and the new Extreme-S trigger mechanism.

Technical Features
Technical choices, such as the Vertec steel frame and the Brigadier slide, take the weight of the 92X Performance to 1350 g, a key weight which increases the pistol’s stability and reduces muzzle rise when shooting. The oversized magazine and the rear chequering, which can also be found on the front of the frame, improve the pistol’s handling as well as its grip. The raised frame profile near the magazine release enables the shooter’s hand to sit as high as possible on the hilt, which itself is also oversized to enable a deeper hold. The magazine release is oversized and reversible and an adjustable version is available on the aftermarket. Safety on the frame is ambidextrous and is available in three different size profiles, making it adaptable to various hand types and different IPSC divisions. 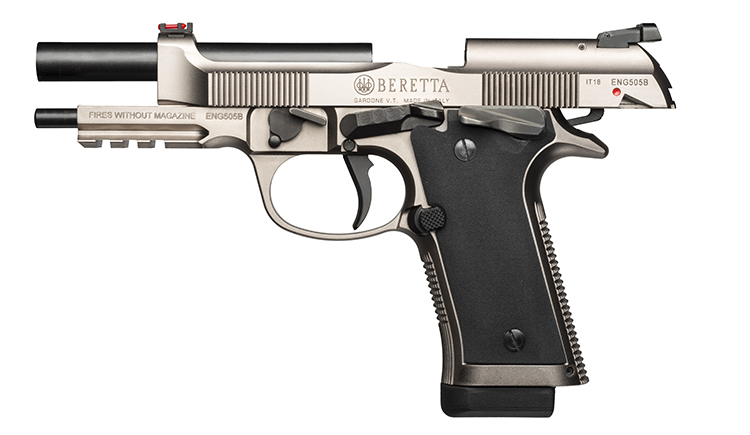 92X PERFORMANCE
Faster cycle time
To enable even faster cycle time, the 92X has a skeletonized hammer with a competition standard hammer spring. The new Extreme-S trigger mechanism keeps the striker automatic safety latch active ensuring the safety of the pistol in case it falls but decreases trigger reset by up to 40%. With the Extreme-S the 92X Performance has an “out of the box” weight of 1.5 kg in single action and 3 kg in double action. The saw-toothed handling grooves on the front and rear of the Brigadier slide ensure maximum grip during slide movement, in all conditions. The steel spring recoil rod ensures maximum operational accuracy. The area where the finger rests on the trigger is chequered and was redesigned to achieve a vertical front profile in single action.

The “Match” take down lever ensures a precise reference point for the second hand. The “hold open” lever profile is lowered and is of the “stealth lever” type, so as not to interfere with the finger resting on the safety lever during the out of ammunition warning. 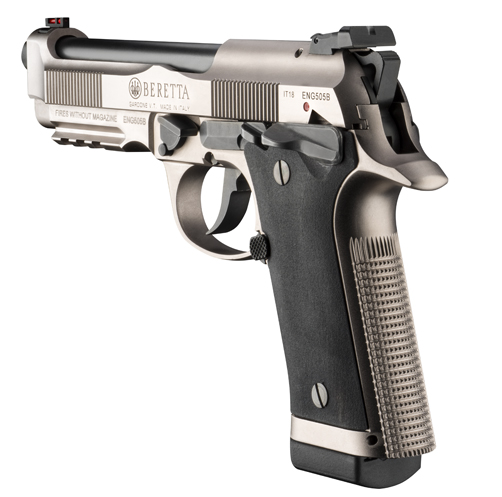 The front bead is equipped with a red fibre optic insert to enable quick and accurate aim realignment, it also has a rear sight, without coloured references, which can be adjusted laterally and vertically to the micrometre.
The 92X Performance also offers the possibility to regulate the pre-travel and extra travel via two screws located inside the frame, next to the upper section of the magazine well.
The 92X has an appealing and refined dual tone look, obtained using a Nistan finish to treat the frame surface and slide with the contrast provided by the black burnished barrel.
The pistol comes with two 15-cartridge magazines with an oversized rubber pad to give the dominant hand extra grip and to protect the magazine during quick change operations.