Kahr Arms announced a new ST9 compact pistol that will be a limited run that will support the Beyond the Battlefield non-profit organization.

This pistol is part of the TIG series, named after John Tiegen – a former Marine and CIA security team member who responded to the Benghazi attack in 2012. With his wife, Tiegen founded Beyond the Battlefield to support wounded veterans. There will be only 1000 of the pistols made, and the first 50 will be sold as parts of three gun packages that also include a special Desert Eagle pistol and a special Auto Ordnance Tommy Gun. 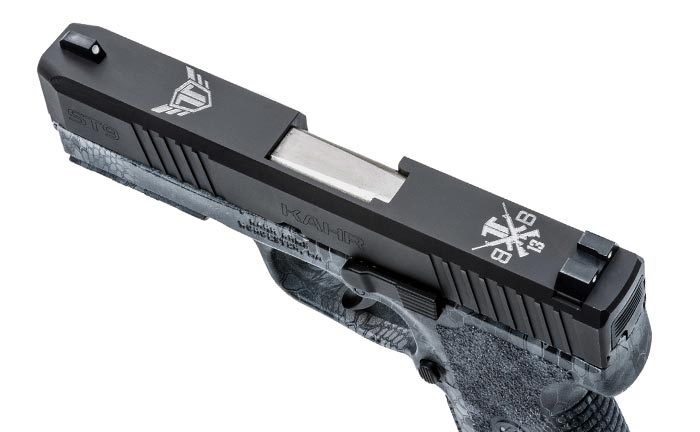 The TIG ST9 is chambered in 9mm and has a 4″ barrel. This particular ST9 has a Kryptek Typhon finish on the frame. The slide has a matte black finish. Each slide has “X of 1000” on the side. Also, each slide bears Tiegen’s signature and Semper Fi.

Other characteristics of the TIG ST9 are the same as those of the plain ST9. This includes the Kahr DAO trigger, 8 round magazines, textured polymer frame with an accessory rail, and three dot sights. Unloaded, the gun weighs about 20.6 ounces with a magazine. It is less than an inch wide at the slide.

These pistols will have a suggested retail price of $541.