According to the Crime Prevention Research Center, “gun free zones” (areas where guns are prohibited) have been the target of more than 98% of all mass shootings. This staggering number is why such designated areas are often referred to as “soft targets,” meaning unprotected and vulnerable.

“According to the Crime Prevention Research Center, only a little more than 1% of mass public shootings since 1950 have occurred in places that were not considered to be a gun-free zone,” reports The Blaze. “In fact, as Crime Prevention Research Center President John Lott Jr. noted in October 2015, only two mass shootings in the U.S. since 1950 have occurred in an area where citizens were not prohibited from carrying a gun.”

Former Vice President Joe Biden, a Democrat, introduced the Gun-Free School Zones Act(GFSZA) to the U.S. Senate in 1990, and it was signed into law by then-President George H.W. Bush, a Republican. The act was clearly proposed with the intent to prevent mass shootings at such precious areas as schools. But the act, as the statistic proves, did not result in the desired outcome.

While mass shootings are a multifaceted issue with more than one action needed to prevent them. In the wake of recent tragic events, it has become abundantly apparent that these gun free areas and employee weapons possession ban must end. Time and again we have tragically witnessed that gun-free zones are in fact some of the most dangerous and vulnerable places in America,” the petition reads. “We are petitioning to allow our properly permitted City personnel to have the right to bear arms and defend themselves while at work. Such arms will be required to remain concealed.

In May 2019, a lawyer for a victim in the Virginia Beach shooting revealed Kate Nixon had considered conceal carrying her licensed gun to work because she feared the gunman, but decided against it because she worked in a gun-free zone building.  Inside the very same city building that left 12 people dead, a city employee has now started a petition to allow licensed workers to conceal carry firearms during work.

Gun control advocates are most likely well-intended here but ultimately these “gun free zones”  are dangerous and we now face an astonishing reality. If someone gets hurt on your property, you can be held financially responsible correct? What makes gun free zones any different?

Gun free zones are enacted per property manager so thus we purpose making “gun free zones” financially liable for bystanders safety IF gun injuries occur inside their gun free zone. They want to remove your right to protect yourself then it’s only right they be responsible for your safety? We can all agree that a successful pro-gun legislation in the midst of the recent gun ban talk would be a huge win for firearm enthusiasts. We as a company want to lobby to law makers to have the gun free zone property managers to be financially liable for any firearm injuries that occur on said  property. Tell us what you think by sharing this article and tagging us.

With the recent mass shootings, some have wasted no time using the event to push an agenda. As I write this some are protesting outside the NRA and I can’t help but think maybe if 94% of mass shootings occurred at the NRA the public would have already banned the organization long ago.  However, 94% of mass shootings are NOT occurring at the NRA, but rather inside the very ironically titled ‘gun free’ zones. The ‘gun free zone’ was an idea cooked up long ago by Senator Herb Kohl in 1990 and implemented by Joe Biden in 1990. 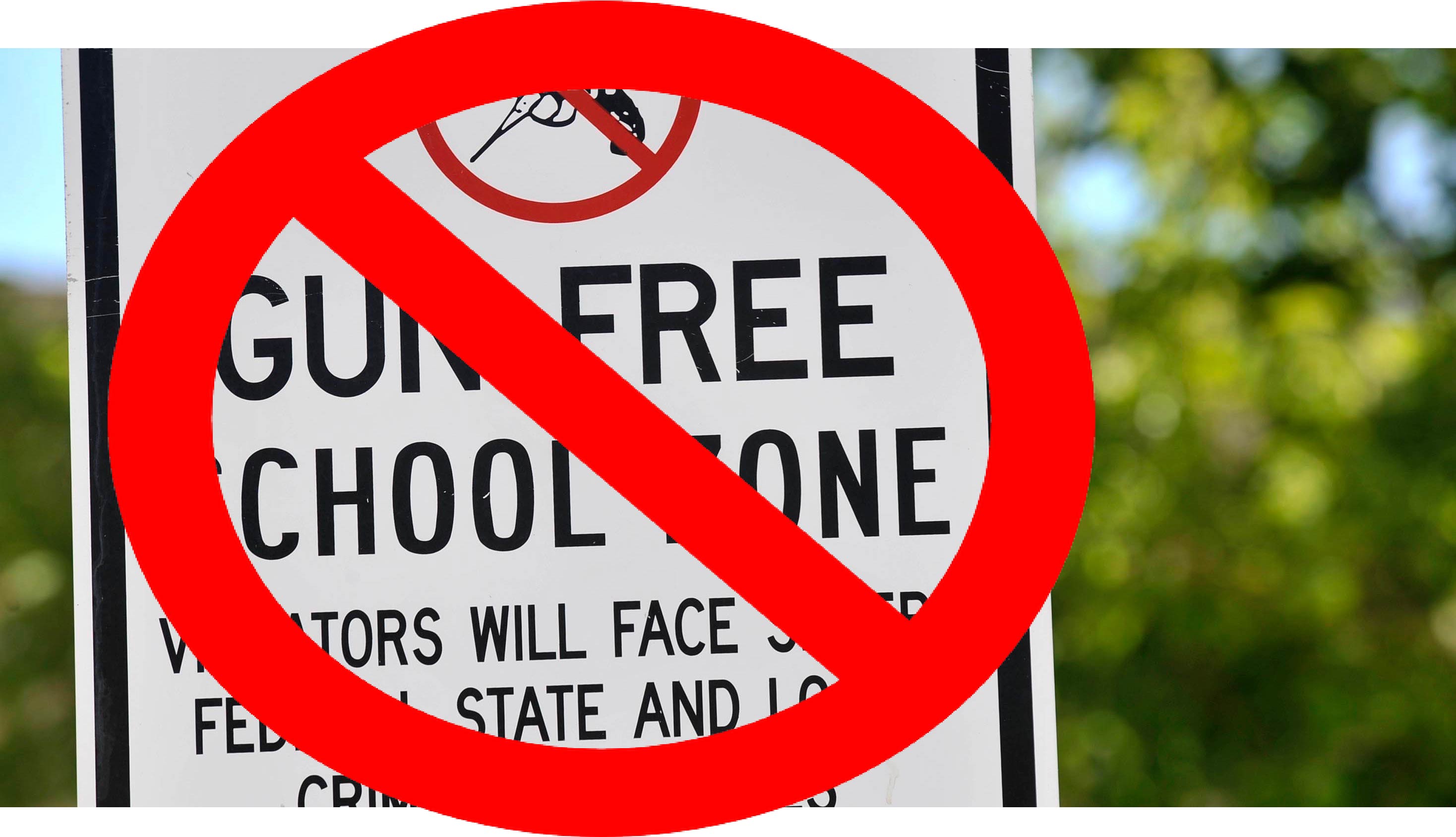 The Gun-Free School Zones Act (GFSZA) is an act of the U.S. Congress prohibiting any unauthorized individual from knowingly possessing a loaded or unsecured firearm at a place that the individual knows, or has reasonable cause to believe, is a school zone as defined by 18 U.S.C. § 921(a)(25). The law applies to public, private, and parochial elementary schools and high schools, and to non-private property within 1000 feet of them. It provides that the states and their political subdivisions may issue licenses that exempt the licensed individuals from the prohibition.

It was first introduced in the U.S. Senate in February 1990 by Senator Herb Kohl of Wisconsin and then was incorporated into the Crime Control Act of 1990 that was signed into law by President George H. W. Bush.

When it comes to gun free zones, when was the last time you heard about the total number of death totals inside gun free zones? Or even just a fact of how many shootings happen inside a gun free zone? A report recently updated by crimesearch.org showed that 94% of mass shootings have happened inside gun free zones. We all knew the number would be high but not 94% high. With this information in hand, can gun enthusiasts use it to beat back the gun grabbers? A win for pro-gunners would be a great response to the call for tighter gun control by democrats, which we believe is really just politicizing the recent tragedy in Ohio and Texas.

There is a famous saying among politicians, “Never pass up a good tragedy.” 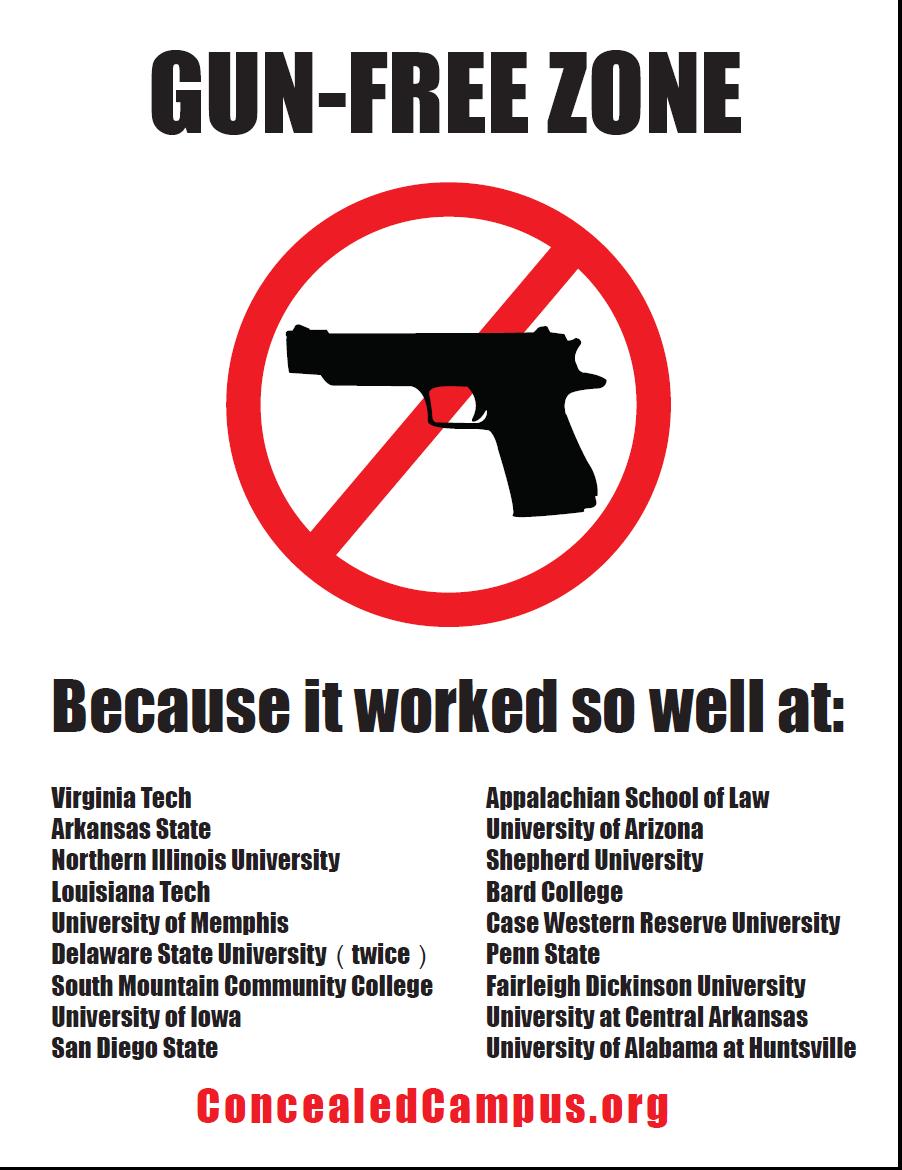 Here are some general points about how to classify mass public shootings that have occurred in gun-free zones.

1) A lot of work is involved in obtaining information on whether the attacks occurred in gun-free zones.  This includes calling the businesses or other facilities involved.  But many times those organizations are uncooperative and in those cases much time is spent contacting individuals in the area of the attack and asking them if they can provide pictures or other information on the facilities. Indeed, the media virtually always refuses to mention whether the attack occurred in a gun-free zone.

Unfortunately, Everytown for Gun Safety/Mayors Against Illegal Guns did not do this work, and they have also inaccurately stated, ignored, or simply missed facts that are readily available in news stories.

3) The word “public” is also key to these cases.  Shootings that occur in people’s homes will often involve killers who know if guns are owned in the home.  And if there is a gun in the home, the killer will know who has access to it.  The FBI also defines “public” places as “includ[ing] commercial areas (divided into malls, businesses open to pedestrian traffic, and businesses closed to pedestrian traffic), educational environments (divided into schools [pre-kindergarten through twelfth grade] and IHEs), open spaces, government properties (divided into military and other government properties), houses of worship, and healthcare facilities” (p. 12).

4) There is also the distinction between right-to-carry and may-issue laws.  If virtually no one, especially general civilians, is allowed to get a concealed handgun permit as occurs in most may-issue jurisdictions, the area is essentially a gun-free zone.

Our past work has also collected information on which schools are gun-free zones and which ones are not.

We want to help make sure 100% of gun free zone property owners financially liable for gun injuries sustained inside their gun free zones. You can help every step of the way. Share this article with your friends and visit the petition page and sign today located here: http://bit.ly/31Vs8sH.