The missile incorporates stealth characteristics and has an official range in excess of 500 kilometres (300 mi). Taurus is powered by a turbofan engine at Mach 0.8–0.9 and can be carried by Tornado, Eurofighter Typhoon, Gripen, F/A-18, and F-15K aircraft. 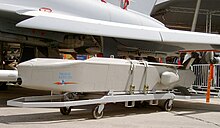 The double 500-kilogram (1,100 lb) warhead, called Mephisto (Multi-Effect Penetrator HIghly Sophisticated and Target Optimised), features a precharge and initial penetrating charge to clear soil or enter a bunker, then a variable delay fuze to control detonation of the main warhead. The missile weighs about 1,400 kg (3,100 lb) and has a maximum body diameter of 1 metre (3.3 ft). Intended targets are hardened bunkers; command, control, and communications facilities; airfield and port facilities; ammunition storage; ships in port or at sea; and bridges. The missile makes itself unique by also including a counter measures as a self-defence mechanism.

Mission planners program the missile with the target, air defence locations and planned ground path, then the missile uses a low terrain-hugging flight path guided by INS, IBN, TRN, and GPS to the proximity of the target, although it is capable of navigating over long distances without GPS support.  Once there the missile commences a bunt (climb) manoeuvre to an altitude intended to achieve the best probability of target acquisition and penetration. During the cruise flight a high resolution thermographic camera (infrared homing) can support the navigation by using IBN and is also used for GPS-free target attack. The missile attempts to match a camera image with the planned 3D target model (DSMAC). If it cannot, it defaults to the other navigation systems, or, if there is a high risk of collateral damage, it will steer to a pre-designated crash point instead of risking an inaccurate attack with undesired consequences.

Spain’s military bought 43 missiles. The integration of the Taurus in the Spanish Air Force service line has been certified by the successful completion of a dedicated test campaign in South Africa, carried out in May 2009.

South Korea planned to order 200 missiles to integrate with their F-15K Slam Eagles after being refused Lockheed Martin’s AGM-158 JASSM by Washington. The Defense Acquisition Program Administration (DAPA) signed the deal in November 2013. Taurus Systems will open an office in Seoul to handle various acquisition tasks and support technology-transfer and joint development of the next cruise missile. The office was the company’s first outside of Germany, and the KEPD 350 is the first European missile to be integrated onto a Korean fighter aircraft. In October 2016, South Korea announced it would acquire a further 90 Taurus missiles, in addition to the 170 previously ordered, in response to North Korean nuclear and missile provocations. On 12 December 2016, the first 40 Taurus KEPD 350K missiles were delivered to the ROKAF, which began deployment for combat use on 22 December 2016.

The Taurus KEPD 350K variant for the ROKAF differs from the baseline model by being equipped with a Rockwell Collins GPS receiver with a Selective Availability Anti-Spoofing Module (SAASM) to prevent jamming.

In October 2015, Taurus Systems revealed it was developing a smaller version of the Taurus missile, called the 350K-2, for use on light fighters, particularly the South Korean FA-50. Range would be reduced to 400 km (250 mi) and it would have a cruise speed of Mach 0.6–0.9.

In December 2016, South Korea’s Defense Acquisition Program Administration (DAPA) revealed it plans to start development on its own indigenous long-range air-to-ground missile in 2018, based on the Taurus cruise missile. The weapon will be mounted on the KAI KF-X fighter, to be developed by the mid-2020s.