The purpose of the Electoral College is to balance voting power across states so no one region of the country can gain too much control. If a president is elected by a simple majority of votes, a candidate who is wildly popular in one region can ignore or bypass smaller regional votes and campaign only where large majorities are. Or for example,  a candidate who does well in California and New York and Texas cannot silence other states completely. 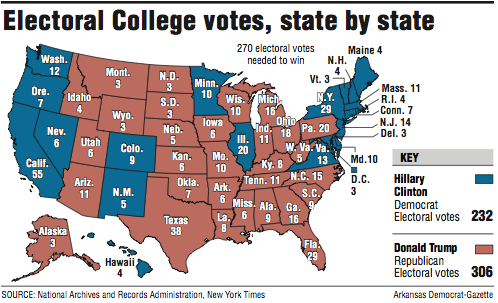 The United States Electoral College is a body of electors established by the United States Constitution, constituted every four years for the sole purpose of electing the president and vice president of the United States. The Electoral College consists of 538 electors, and an absolute majority of 270 electoral votes is required to win an election. Pursuant to Article II, Section 1, Clause 2, the legislature of each state determines the manner by which its electors are chosen. Each state’s number of electors is equal to the combined total of the state’s membership in the Senate and House of Representatives; currently there are 100 senators and 435 representatives. Additionally, the Twenty-third Amendment provides that the District of Columbia (D.C.) is entitled to a number of electors no greater than that of the least populous state.

The Electoral College seems to be on life support since Hillary Clinton lost the 2016 election. Her Democratic constituents have been scrambling to find a way back into the White House in 2020. “Pure democracy” is just another phrase for “mob rule.” Dictatorship of the majority means 51 percent of the citizenry rule the other 49 percent. That minority has no rights except those the condescending majority grants. It works well for those in the 51 percent, not so much for those in the 49. Plato knew it, and James Madison, who knew his Plato, did too. Plato and James Madison both recognized that justice and liberty for the minority is possible only when power is shared between groups in society.

Inspired as it is, our Constitution protects the minority while preserving the best of democracy: we the people elect representatives to run the government (republic) governed by the rules of our Constitution. That means our we are a Constitutional Republic. Ergo, the Electoral College.