The 2018 attempt to ban bump stock’s has gone down in flames.  The two areas that did get it passed only three bump stocks were turned during police collections, despite the Denver & Massachusetts ban.  It’s now safe to say we can now chalk the bump stock ban up as yet another failed attempt at “gun grabbing” legislature. In January, Massachusetts authorities urged any residents with bump stocks or trigger cranks to surrender their devices to police.

After the October shooting at the Route 91 Harvest Festival left leaves some dead and many more wounded. Like always lawmakers rushed to enact legislation they hoped would prevent similar tragedy in their home districts. Denver Colorado, and Massachusetts made bump-stocks illegal and then demanded that owners turn over the devices. As you may have guessed, these new laws are not working as politicians had hoped.

Denver Bans Bump Stocks in January. Here’s How That’s Working Out So Far….

After making the add-ons illegal, and enacting steep fines and jail time for possession of the devices, the city has yet to have a single bump-stock turned in to police.

“The ban on bump-stocks approved by the city council in January was considered largely symbolic,” The Denver Post writes. “Denver had previously banned the types of semi-automatic rifles that can be modified with bump stocks.” – The Denver Post

Denver isn’t a firearms-friendly city, for sure. In addition to “the types of semi-automatic rifles that can be modified with bump stocks” and bump-stocks, Denver has prohibited magazines that hold more than 15 rounds.

Bump-stocks are a specific type of device. Denver defines them like this: “any device for a pistol, rifle, or shotgun that increases the rate of fire achievable with such weapon by using energy from the recoil of the weapon to generate a reciprocating action that facilitates repeated activation of the trigger.” 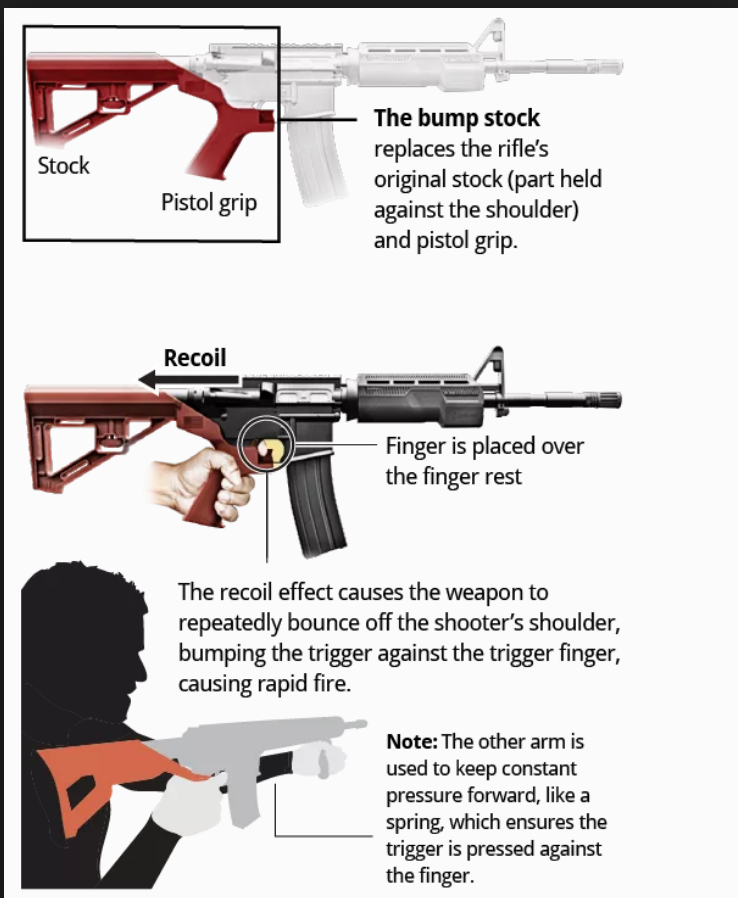 The bill was proposed by State Sen. Mike Merrifield, D-Colorado Springs. His initial bill had more stringent penalties and would classify offenders as Class 5 felons.  Anyone caught with a bump-stock (even one that isn’t on a rifle) will face a fine. The low end is $100, and the high appears to be $999. In addition, offenders might face up to 180 days in jail.

“Why would you need a bump stock unless you intended to kill as many people as fast as you could?” he told the Post. “That should not be a partisan issue. Protecting the lives of Colorado citizens from insane mass killers should be something we should all be happy to join in.”- State Sen. Mike Merrifield

The arrests of Texas duo Francho Bradley and Adrianne Jennings by Tewksbury Police this weekend mark one of the first violations of a bump stock ban across the country.

Bradley, 59 and Jennings, 40, were arrested Saturday after Bradley called Tewksbury Police to his hotel room at the Residence Inn, believing someone had broken in and messed with his video surveillance. He told police he had a firearm in his room that he didn’t want to fall “into the wrong hands,” a police report notes.

Inside the room, officers found firearms and devices, including eight magazines that appeared to be fully loaded with more than 10 rounds of ammunition.

Multiple long guns, flares, and a few rifles were found inside Bradley’s room. Police also found a bump stock, a device that increases a weapons’ rate of fire and simulating the firing capabilities of increasing the weapons rate of fire.

Massachusetts became the first state in the country to ban bump stocks following the Las Vegas massacre in October, when shooter Stephen Paddock supposedly killed 58 people at a country music festival. Other rumors about this night involve a failed assignation attempt on the Saudi Prince who lived in the top 3 floors of the Mandalay Bay hotel. Believers say the hotel window was originally broken at the very top right of the hotel instead of the of third floor as police reported.

President Donald Trump followed suit after the school shooting in Parkland, Florida in February, when he publicly called for a federal ban on bump stock devices.

The bump stock police found in Bradley’s Tewksbury hotel room was the first to violate the ban in Massachusetts, according to a spokeswoman from the office of Middlesex District Attorney Marian T. Ryan. Due to lack of uniform jurisdiction on bump stocks across the country, authorities suspect the charge is likely the first of its kind in the country.