Why The American Flag is Reversed on Military Uniforms

Why The American Flag is Reversed on Military Uniforms

History of the Backward Flag

Troops have adopted the phrase “assaulting forward”. Basically, the idea behind the backward American flag on Army uniforms is to make it look as though the flag is flying in the breeze as the person wearing it moves forward. During the Civil War, both mounted cavalry and infantry units would designate a standard bearer, who carried the flag into battle. As this standard bearer charged, his forward momentum caused the flag to stream back. Since the Stars and Stripes are mounted with the canton closest to the pole, that section of the flag stayed to the right, while the stripes flew to the left. Therefore, the flag is worn on the right shoulder, and wearing it backward gives the effect of the flag flying in the breeze as the wearer moves forward. Consider the flag on a pole, the flag puts the stars on the left-hand side next to the flag pole, that’s the most prestigious position. On an arm patch, you are looking at it differently and when the soldier, or marine or whatever, marches forward, the US flag most face forward. It must not be seen to be in retreat. And so the stars are actually now on the right-hand side of their badge and so they face forward, just as it never retreats. As is when  the flag is flown on a car, it’s also always “assaulting”. 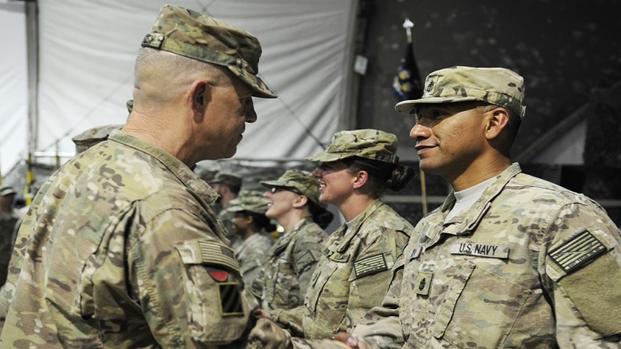 A lot of people ask, “why is the US flag reversed when it’s on an arm patch of a US military?” Just as the US flag dips to no man or king and you will see even at the Olympic ceremonies, the American flag is the only one that doesn’t dip to the head of state of the host country. Because — it’s not a mark of disrespect to them, it’s a mark of respect to the American flag. And we take it seriously. So seriously that our flag must always face forward.

You might think this is takes things to the extremes but when you have something as serious as the American flag, they are about passion and extremes of belief. And the Americans take their flag very, very seriously.